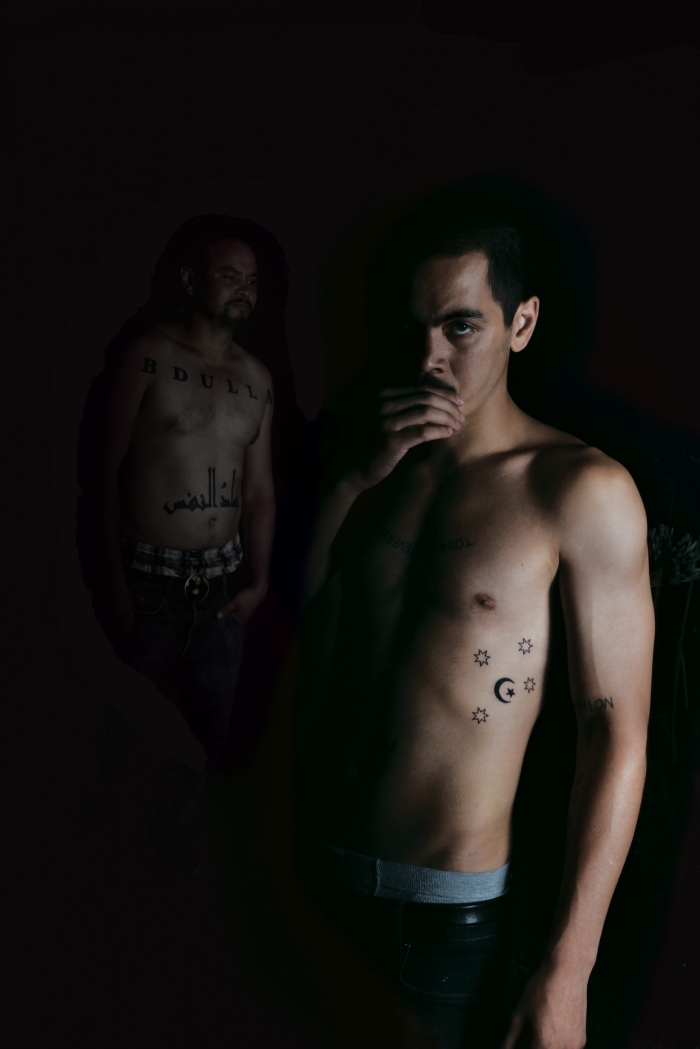 It has been an exhausting few days and it still continues, as names, faces, and lives are recounted in the death toll from the Christchurch shootings. It is communicated primarily as a media event as we are swamped by the pictures and video of those directly affected expressing their grief. And this was the intention of the ‘shooter’. It had to look good on TV. Texts were posted online explaining his motivation. Live feed was broadcast using a camera mounted on his assault rifle. All the guns he used were emblazoned with written texts, white on black, proclaiming racial supremacy with the names of his heroes listed along the handles. Even when we saw him in a photograph taken during his brief court appearance with his face blurred out, his right hand was clearly gesturing a supremacist logo of the black circle, a gesture clearly meant for a select audience of knowing viewers. This ‘shooter’ has used the technology to give himself a starring role in his own narrative, a narrative of hate that is meant to inflict maximum pain and offence to values based in tolerance and love. He has acted out what his small community of belief have visualised for some time.

Seeing is a powerful force in our image-driven media age. Discerning, therefore, how we are taught to see is an important process of living with visual awareness in a media culture. Attitudes about religion, race, and gender are mediated in and through images which may, on the surface, seem natural and self evident but actually work to structure our performance as humans. Abdul Abdullah is a contemporary artist well aware of the power of looking and of being looked at. As a young emerging artist, Abdul Abdullah won the Human Justice Award, part of the Blake Prize for Religious Art in 2011. His work was a photographic work that made plain the power of such a gaze, and was titled ‘Them and Us’. The work is something of a self-portrait, with the young artist depicted in the frame with his brother in the background. Both figures seem to swagger into focus dressed in jeans without a top, leaving their dark skin the feature of the work. The work captures that moment of encounter, when walking down the street as two young males saunter into the proximity of one’s personal space.

In the framework of a pedestrian encounter the viewer tries to locate these two young men quickly into a category of safety or of threat. As a viewer, I am unsettled by the ambiguous stance of the main figure addressing me through his gaze. It sets up a relational space that is fraught with choices, assumptions, and my own prejudice now made visible. I know in a pedestrian context I would be looking away, if not walking around such a figure. The artist through this means has been able to make me aware of the visual stereotypes I use to evade real engagement. In the process of looking at this figure I become aware that I am being invited to take a next step, to respond. It’s my move. How do I respond to the visual cues found in the figure, dark skinned and tattooed. The tattoo in the second figure is clearly Arabic script which pushes this figure into an ethnicity and religious identity beyond my everyday circle of social comfort. I am on the edge, so how do I respond?

I need to divide the world into safe and unsafe, mine or yours, for life is filled with hidden boundaries. These boundaries provide safety and order, until of course they are transgressed. But this figure is looking back at me and I wonder what he sees, as looking goes two ways. This tension is best found in the image of the tattoo on the flank of Abdullah that depicts both the Southern Cross and the crescent star and moon. The artist comments: ‘Australia is one of the best places in the world to live. But growing up a Muslim in this country, you get used to seeing Muslims portrayed negatively in the media. In the popular imagination … you are the bad guy. You start to feel the divide of – them and us’.

Here on the skin of the artist are iconic references to both Australian and Muslim identity that creates something new. This is a mark that confronts my expectations about whether this figure is in my tribe or not, or more correctly whether I can widen the boundaries of what constitutes an Australian identity to include this person who is different. The marking of skin is an act recorded in this photograph that unhooks expectations and creates something new – a space for change and new understanding. Abdullah comments: ‘The figures look out at the viewer expectantly, trying to build some sort of bridge’.

The artist has in this image achieved two things. He has sympathetically helped us find our way alongside the skin of another. But, secondly, he offers us a way to bridge the space of separation by imagining something new – a Muslim Australian identity that broadens our sense of who ‘we’ are, that invites inclusion and an expansion of our definitions of identity. This is an offer that is in stark contrast to the manner in which hatred has been structured in the Australia media through images that link Muslim identity with terrorism, or through the way the debate on immigration has been shaped around religious difference. We have visited upon those who are different our corporate fears and uncertainties. Abdullah, in contrast, offers us a mirror so we may investigate more clearly our prejudices which cloud the manner in which we see. Seeing, and being seen, is an invitation to step outside the stereotypes that straight-jackets behaviours and to be surprised by the creative diversity of human culture. Diversity might be our culture’s greatest resource. It may also be our greatest challenge. To see and receive what is different and other, is in turn an opportunity to recover a fuller sense of seeing ourselves.

A video interview with the artist Abdul Abdullah where he talks about this work is on the Blake Prize YouTube channel.

Abdul Abdullah is an artist from Perth, currently based in Sydney, who works across painting, photography, video, installation, and performance. As a self-described ‘outsider amongst outsiders’, his practice is primarily concerned with the experience of the ‘other’ in society. Abdullah’s projects have engaged with different marginalised minority groups and he is particularly interested in the experience of young Muslims in the contemporary multicultural Australian context, as well as connecting with creative communities throughout the Asia Pacific.