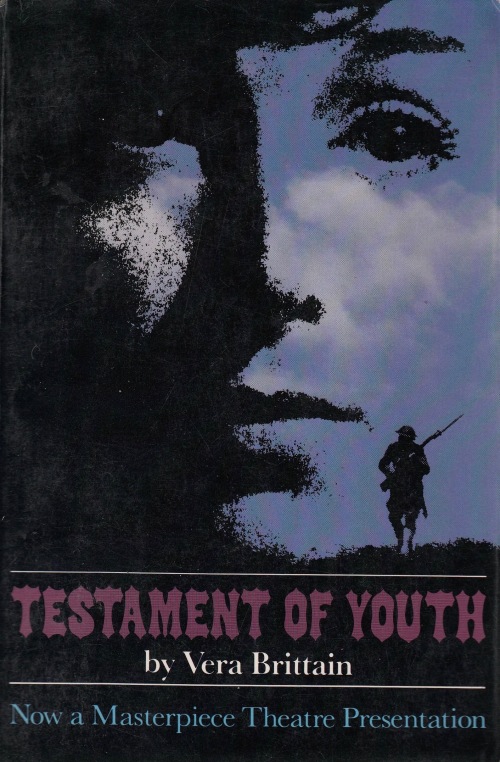 An ancient copy of Testament of Youth, the 1933 best-seller by Vera Brittain, has sat on my bookshelf for decades, surviving any number of culls of varying degrees of brutality, maybe because I knew at some level that this was a classic that I really should read one day. But it wasn’t until my interest had been sparked by seeing the latest movie version of this tale that I got around to picking it up.

This memoir of the years between 1914 and 1925, the decade containing World War I, cannot be rushed. It was written in an era when, harsh and full as life was, a writer seemed to have all the time in the world to explain things in great detail. It’s not for one minute boring, it just takes a while to read it.

Brittain tells the story of her harrowing war experience. A bright young woman who fought fiercely for the right to attend Oxford, her sheltered upper-middle-class English world was thrown into chaos by the war. All the people she was close to were killed and she worked for years as a highly capable VAD (Voluntary Aid Detachment) nurse in various wartime hospitals, including right behind the front lines in France.

Brittain went on to become a well-known novelist, poet, and public speaker; feminism and pacifism were the causes dear to her heart. She belonged to that generation that believed, for a little while, that they could shape the world so that it learnt the lessons of the ‘War to end all Wars’ which turned out, of course, to be nothing of the sort. At the end of the book, she laments the fact that more horrific conflict is on the horizon, that her children will be exposed to carnage of the sort she hoped to never witness again.

Brittain grew up at the end of the Victorian period, in a world of extraordinary privilege. Reading accounts of such lives, I always marvel at the leisure and boredom of the existence of comfortably off women whose job was simply to organise servants and go visiting. I look at my life and that of my peers, both women and men – we hold down jobs, bring up children, run households and fulfil community commitments without any assistance from servants whatsoever. Not that I would swap – Brittain’s struggle was largely one to escape precisely such a set up.

Nothing enables me to live in worlds other than my own more than good writing. Brittain’s devastation as one after another of her beloved peers are killed is heart-rending. She talks about her ‘doomed generation’, and they were. I cannot begin to imagine the weight of grief upon grief that most people suffered in those years, although several contemporary situations compare – families of asylum seekers the world over, certain Indigenous communities, nations like Syria and the Sudan in an ongoing state of conflict. I belong to a generation who has never had to live through war. My parents’ generation, on the other hand, lived not only a through war but through six long years of the terror of fearing that barbarism might well take over the world. We live in complicated times, with pressures our forebears cannot imagine, and the threat of global-warming is the greatest our planet and our race has ever known, but I cannot begin to imagine the sheer courage that women and men living through a war needed simply to get up each morning and face what had to be faced.

Testament of Youth is refreshing because it is a women’s war book, so, to this reader is infinitely more interesting than the many war tales penned by men. The experiences of women at home, making do despite war time shortages and waiting for the dreaded telegram that would tell them of the death of their husband/lover/father/brother/son are way beyond anything I have had to endure. The lives of nurses on the front lines were inhumanely exhausting and distressing as they dealt with daily carnage without benefit of much in the way of medical supplies or even clean water.

Another striking thing in this long tale is the very different style of relationships young people engaged in and the way letters formed the basis of how they became close. Brittain falls deeply in love with a young man and they become engaged, but they have only had a dozen or so times actually together, most of these accompanied by a chaperone. But the letters they wrote, sometimes several a week! A large part of her book consists of quotes from letters to and from her parents, her adored brother and her fiancé. They are long, poetic, honest, deep, philosophical, yearning. There was time to write this way, back then, war notwithstanding. Her brother Edward regularly scribbled pencilled notes from the trenches that made their way safely to his family; at one point he complains that it takes a day and a half for his letters to travel from the front line in France to his family in London. Australia Post eat your heart out!

They poured out their very souls in these letters, in a way that I suspect contemporary lovers rarely do with their instant messaging and their moving in together five minutes after they ‘hook up’. The sheer longing for each other in these epistles is a world away from the instant gratification we have come to expect in everything, including sex. I’m not wishing myself back there exactly – I do wonder how marriages panned out when these heightened times were over and a couple had to settle down to jobs and housework and the daily irritations that are a part of a long love. But the contrast with current practices is staggering.

Testament of Youth is a long, slow read, so exquisitely written that I wanted to savour every page. I loved Brittain’s acerbic humour and her fierce, unapologetic feminism (impressively, even after marriage, she kept the name of her family or origin) which is captured in such passages as this one, which litter the volume:

…all girls’ clothing of the period appeared to be designed by their elders on the assumption that decency consisted in leaving exposed to the sun and air no part of the human body that could possibly be covered in flannel. In these later days, when I lie lazily sunning myself in a mere gesture of a bathing suit on the gay plage of some small Riviera town – or even, during a clement summer, on the ultra-respectable shores of southern England – and watch the lean brown bodies of girl-children, almost naked and completely unashamed, leaping in and out of the water, I am seized with an angry resentment against the conventions of twenty years ago, which wrapped up my comely adolescent body in woollen combinations, bulky cashmere stockings, ‘liberty’ bodice, dark stockinette knickers, flannel petticoat and often, in addition, a long-sleeved, high-necked, knitted woollen ‘spencer’.

Reading Testament of Youth powerfully strengthened my conviction that entering another’s world, by engaging deeply with stories not our own, brings a compassion, sympathy, learning, and wonder more effectively than just about anything else. If Hitler had read The Diary of Anne Frank. If Trump could read – really read – the stories of people desperately fleeing across the Mexican border. If Peter Dutton could immerse himself in a book written by an asylum seeker. If Scott Morrison could get into a story of someone who has never had quite enough money to buy their kids shoes or go on a decent holiday. If Harvey Weinstein could read a book about a woman who has been sexually exploited. If we could, all of us, read and weep, read and resolve to never let carnage and abuse happen again, read and feel compassion for our planet and its people. Read.

Clare Boyd-Macrae is a Melbourne writer and editor. She lives and works on Wurundjeri land.